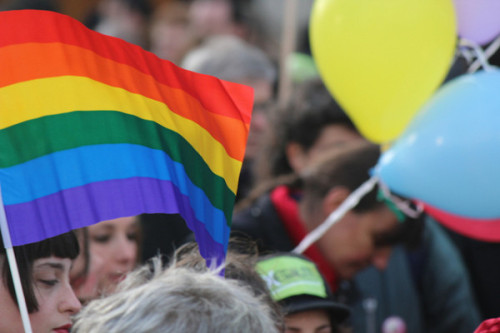 London is a cultural jungle. So much to see. So much to do. Seemingly such little time. My cultural pick of the next two weeks is, without doubt, the FLARE FILM FESTIVAL (The London LGBT Film Festival) which opens today and runs 16-27th March – it’s the largest LGBT film Festival in Europe and it celebrates 30 glorious years this year.

Whether you choose to engage with this event via a Faraday Pride event or independently; if you’re passionate about cinema, art and culture or you just want a bit of entertainment, I urge you not to let the FLARE pass you by. This is a very popular event and most screenings sell out within hours.

In the true meaning of festival, it is a celebration on many levels. Here are my top three reasons for not letting this festival pass you by:

I’ve secured a small allocation of tickets for the following films, please take note the screening date and time:

–Mapplethorpe: Look at the Pictures – Saturday 19 March 2016 18:30
This in-depth portrait of the legendary American photographer Robert Mapplethorpe features an extraordinary range of interviews with family, friends, fellow students, artists, lovers, models and co-workers. There are rich testimonies from eyewitnesses at various stages of Mapplethorpe’s career. Beautifully shot, it is a carefully constructed celebration of an individual’s devotion to art and a record of the power of photographic expression.
https://whatson.bfi.org.uk/flare/Online/default.asp?BOparam::WScontent::loadArticle::permalink=mapplethorpelookatthepictures

–Loev – Wednesday 23 March 2016 20:40
Two men reconnect in this emotionally raw and politically radical gay love story from India. Shot in complete secrecy in a country where homosexuality is still punishable by law, Sudhanshu ‘Suds’ Saria’s debut film is a bold and important film – as politically radical as it is emotionally raw. That it exists at all is something to celebrate, but that it is such a confident, compelling and emotionally rich piece of work is nothing short of extraordinary.
https://whatson.bfi.org.uk/flare/Online/default.asp?BOparam::WScontent::loadArticle::permalink=loev

–Carmin Tropical – Thursday 24 March 2016 20:30
A trans woman is drawn back to her past after the murder of her friend in this Mexican thriller. Rigoberto Perezcano’s accomplished and often poetic film explores nostalgia through the prism of a tense thriller.
https://whatson.bfi.org.uk/flare/Online/default.asp?BOparam::WScontent::loadArticle::permalink=carmintropical