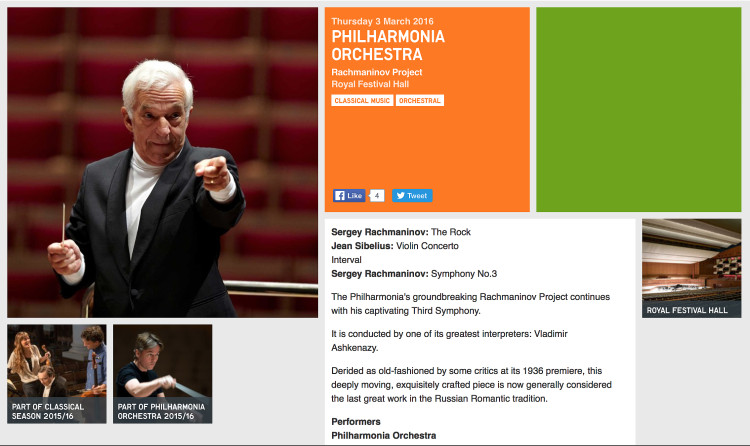 London is home to many world class concert halls – the Barbican, the Royal Albert Hall, the Royal Opera House to name a few. Next Thursday there’s a treat for the music lovers amongst you. We’re off to the Royal Festival Hall to see the Philharmonia Orchestra perform Rachmaninov’s 3rd Symphony. This forms part of the Philharmonia’s groundbreaking Rachmaninov Project and is conducted by one of its greatest interpreters: Vladimir Ashkenazy. This deeply moving, exquisitely crafted piece is now generally considered the last great work in the Russian Romantic tradition.

And that’s not all – we also have soloist Esther Yoo playing Sibelius’s fiendishly difficult Violin Concerto, his only concerto and recognised as having been composed for the virtuoso he never became.

Our seats will be in the choir stalls which will give us the added benefit of observing the orchestra up close and we’ll be facing the conductor which is quite the unique perspective! Tickets will be available from Monday in the Program Office for the knock down price of £3 each.