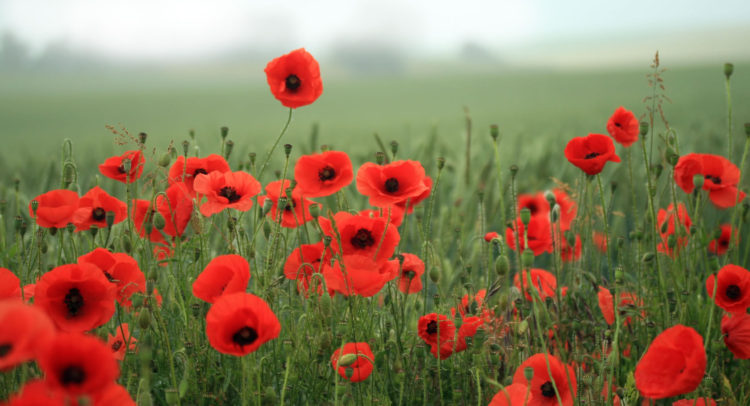 I’m quite sure by now you’ve started seeing people wearing poppies in their lapels, perhaps you’ve seen poppy sellers at tube or train stations – and rest assured if you haven’t yet, you will. So what’s with the poppy? It’s a tradition that began in 1921 – sparked by a poem written by a Canadian Doctor John McCrae who was serving in Ypres (Belgium) during the First World War.

Poppies are annual wild flowers whose seeds can lie dormant in the soil for decades waiting for the right growing conditions. During the Great War, the battlefields of Flanders provided the perfect conditions as the land was so churned up by shells and mines – and consequently poppies sprung up and bloomed in profusion. Like so many of those who perished during the Great War, poppies too are short lived and so the poppy has become the symbol of life cut short by war.

In 1921 the British Legion began a Poppy Day Appeal to raise money for poor and disabled veterans. To this day money raised from poppy sales provides direct assistance for ex-service people in financial distress, as well as funding for medical appliances and research, home services, care facilities and numerous other purposes.

The poppy is not meant to glorify war, nor should it be seen as a symbol of religion or politics, it is a symbol of remembrance for lives lost and the annual ‘poppy season’ will culminate on Remembrance Sunday (November 13th this year) when Her Majesty the Queen and a selection of Ministers will lay poppy wreaths at the foot of the Cenotaph.

You may also see a few people wearing a white poppy, which is sold by the Peace Pledge Union to denounce war as a crime against humanity. There exists too a purple poppy, created in 2006 to remember the animal victims of war – all donations from their sale go to the charity Animal Aid. But it is the red poppy which is overwhelmingly the iconic symbol of poppy day, worn as a mark of respect and remembrance.