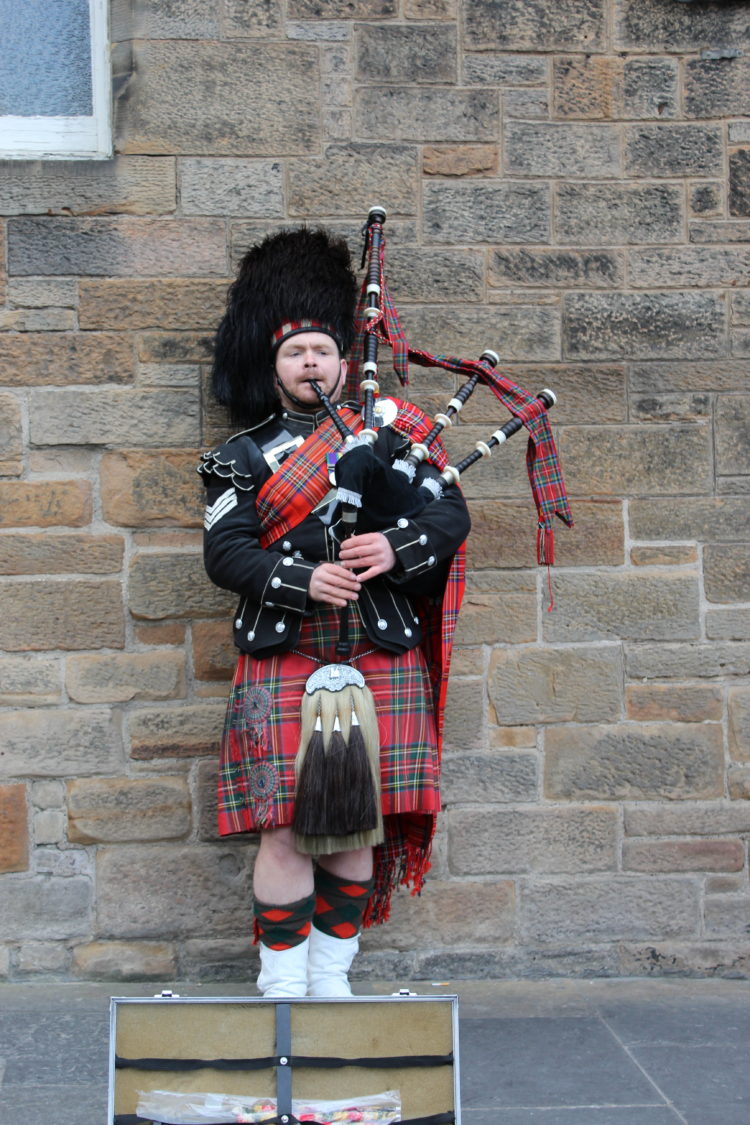 On the weekend of Jan 27 – 29th, SU London took 84 students to Edinburgh. One of our Architecture students, Megan Baker, wrote a lovely blog about her trip. We have, with her permission, decided to share it on here.

Last weekend I had the opportunity to travel to Edinburgh, Scotland with the group from Syracuse University. Those who know me will understand my deep and abiding love for all things Scottish. I own over 60 novels set in this beautiful country and have read more than double that. From the men in kilts, to the sounds of bagpipes, to castles, to the wonderful accents….I LOVE SCOTLAND! And thankfully, Edinburgh did not disappoint. It was everything I could have asked for and more!

We embarked from Kings Cross Station (Shout out to the Harry Potter Fans!) at 8am…what an unholy hour to awaken on a Friday morning. From there we rode the train for four hours which passed by without incident mostly because I slept the entire way. As the 80 or so of us made our way off the platform and to the hotel we looked like the herds of sheep we saw riddling the landscape on the outskirts of town. Upon arrival at the hotel, which was located right off of the Royal Mile (essentially the main street in Edinburgh) we checked into the hotel and were left with a few hours to explore and find lunch.

As I said, we were in a GREAT location so it was hard to choose from all the wonderful looking pubs, cafes, and restaurants. We decided on a café to keep it quick, and I ordered lamb moussaka, or what I like to refer to as Scottish lasagna. This wonderful meal was my first introduction to Scottish food and it was amazing. Minced lamb meat over grilled eggplant and red potatoes covered in onions, red sauce, and cheese, it was once of the strangest and most delicious things I have ever eaten! And served with chips of course (fries for you Yankees!)

Following lunch, we met back at the hotel to receive our free tickets to visit Edinburgh Castle. Located at the end of the Royal Mile, and only a short 20 minute walk from our hotel, we were granted access to explore this iconic structure. The views were 360 of the entire city, and the structure was no less impressive. We even were able to view the Crown Jewels!

That night, we decided to eat at a local pub called the Albanach (which I’m fairly certain means Scottish in Gaelic). Here we split the “wee taste of haggis” which was served as minced meat, mashed potatoes, mushy carrots, and with a side of whisky sauce. I was surprised how much I enjoyed it, though it was more peppery than I anticipated. I followed this with a Steak Pie and a Thistly Cross Cider made in Scotland (which quickly became my favorite drink and the one I had most of the weekend!)

The next morning I awoke bright and early for the walking tour of old town and new town. Our tour guide, Andy, who was Scottish to the bone, greeted us in a kilt! And in traditional Scottish fashion, it rained almost all day. But, we took the tour none the less, discovering everything harry potter (from the Elephant Café where JK wrote the first book, to her home when she resided in new town, to the real inspiration for Diagon Alley, to the real Tom Riddle’s grave site). We were also given much of the history of the city which I won’t bore you with but it is fascinating especially when told to you at 9am by an enthusiastic Scotsman. Lunch was a famous pub called Greyfriar’s Bobby, and the afternoon was taken up by a tour of Holyrood Palace, where the Queen stays when in Scotland, and ended with a visit to Scottish Parliament.

That night was returned to the Albanach, mostly because all of the other pubs were full, and I enjoyed another cider with the best mac and cheese of my life! It was essentially truffle mac and cheese covered in bacon and leaks and served with homemade pita bread and salad. Yum! Later we went to the World’s End Tavern, so named because it is located on the place where the walls of medieval Edinburgh ended, and enjoyed some atmosphere and live music by a local musician.

Sunday morning was sunny once again and heralded the end of my adventure. A leisurely morning was spent shopping and took my to the Scottish Whisky Experience which can best be described as Chocolate World for adults. You went through a ride, much like in Hershey, which showed you the process of making and distilling whisky (called Scotch when it comes from Scotland). Then you entered a room where they explained the 5 regions of where scotch comes from and how each region has a specific taste and sense about it. We proceeded to the next room where they let us choose a type of scotch to try. I chose one from the Speyside region which is generally considered to be light and grassy or rich and sweet. Also, the two best selling whisky’s in the world come from here which is a nice fun fact. Before we were allowed to taste our scotch, they taught us how to drink it. We learned how to tell if the drink is light, medium or heavy, and also the proper way to smell scotch without leaving your eyes full of tears. Drinking scotch is all about the enjoyment of it.

I finished my day with some more “light” shopping and successfully returned home with two Scottish tarten scarves, three celtic rings, a leather bookmark from the castle, and four types of tea (heather, thistle, whisky, and Scottish breakfast) blended right in Edinburgh. This weekend was absolutely amazing and I enjoyed every moment. There was so much to see and discover and the city is absolutely fascinating!